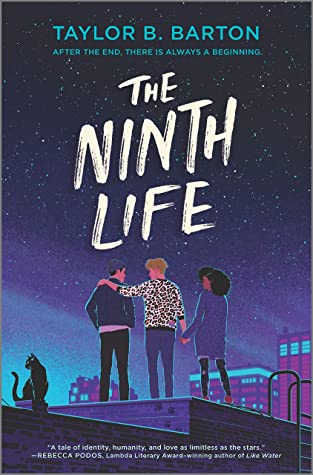 At the end of Caesar’s feline life, he makes a deal with the goddess Zosma to rejoin Ophelia, the girl he loves, for his ninth and final life.

However, waking in the body of seventeen-year-old Austin Price isn’t what he anticipates. Neither is Austin’s handsome roommate, Cooper—a boy who moves him in unexpected ways. And coming face-to-face with a messy past he can’t remember living makes being human even harder than he would have thought.

The chaos and wonder of his ninth life urges Austin to get to know Ophelia on human terms and sends him stumbling into complicated friendships that might mean more to him than he ever imagined. But his wish has a price, and even as Austin is pulled in two impossible directions, the very heart beating in his chest is on a countdown of its own—a countdown he has no control over

Representation: Austin is nonbinary and bisexual; Ryan and Cooper are gay.