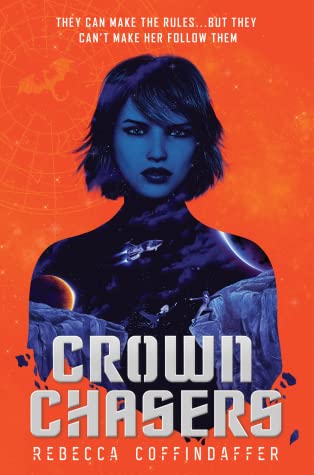 Alyssa Farshot has spent her whole life trying to outrun her family legacy. Her mother sacrificed everything to bring peace to the quadrant, and her uncle has successfully ruled as emperor for decades. But the last thing Alyssa wants is to follow in their footsteps as the next in line for the throne. Why would she choose to be trapped in a palace when she could be having wild adventures exploring a thousand-and-one planets in her own ship?

But when Alyssa’s uncle becomes gravely ill, his dying wish surprises the entire galaxy. Instead of naming her as his successor, he calls for a crownchase, the first in seven centuries. Representatives from each of the empire’s prime families—including Alyssa—are thrown into a race to find the royal seal, which has been hidden somewhere in the empire. The first to find the seal wins the throne.

Alyssa’s experience as an explorer makes her the favorite to win the crown she never wanted. And though she doesn’t want to be empress, her duty to her uncle compels her to participate in this one last epic adventure. But when the chase turns deadly, it’s clear that more than just the fate of the empire is at stake. Alyssa is on her most important quest yet—and only time will tell if she’ll survive it.