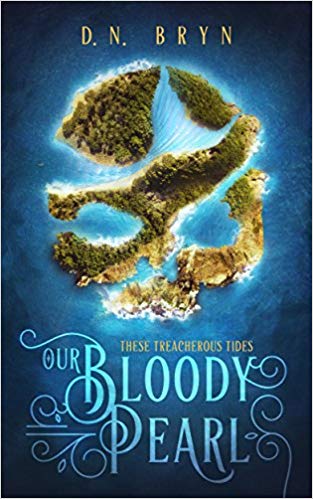 After a year of voiceless captivity, a bloodthirsty siren with a paralyzed fin fights to return home while avoiding the lure of a suspiciously friendly and eccentric pirate captain. Prepare for a voyage of laughter, danger, family, and forgiveness with this #ownvoice fantasy, while your heart is stolen – if not eaten – by sirens.

The ocean is uncontrollable and dangerous. But to the sirens who swim the warm island waters, it’s a home more than worth protecting from the humans and their steam-propelled ships. Between their hypnotic voices and the strength of their powerful tails, sirens have little to fear.

That is, until the ruthless pirate captain, Kian, creates a device to cancel out their songs.

Perle was the first siren captured, and while all since have either been sold or killed, Kian still keeps them prisoner. Though their song is muted and their tail paralyzed, Perle’s hope for escape rekindles as another pirating vessel seizes Kian’s ship. This new captain seems different, with his brilliant smile and his promises that Kian will never again be Perle’s master. But he’s still a human, and a captor in his own way. The compassion he and his rag-tag human family show can’t be sincere… or can it?

Soon it becomes clear that Kian will hunt Perle relentlessly, taking down any siren in her path. As the tides turn, Perle must decide whether to run from Kian forever, or ride the forming wave into battle, hoping their newfound human companions will fight with them.

Sexuality:
Asexual: Dejean
*Sexuality not mentioned in book but in a happy wlw relationship: Murielle and Simone.

Romantic Orientation:
Biromantic: Dejean
Not mentioned in the book. : Murielle, Simone, Perle.
** Perle has no canon sexual or romantic orientation but could easily be read as asexual and aromatic.

Race/Ethnicity:
Black: Murielle
Multiracial: Dejean
South Asian: Simone
Not mentioned: Sirens do not have human features, but all originate from a Caribbean-like setting.