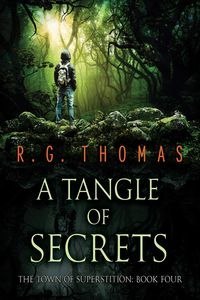 Following the conclusion of his greatest adventure, Thaddeus Cane’s life is changing once again. He is finally reunited with his mother—and dealing with her dangerous new powers—and about to start the year at yet another new school. While he contends with making new friends and facing the school bully, Thaddeus’s boyfriend, garden gnome Teofil, spends his time locked in Leopold’s study, reading through the late wizard’s journals for any clues that might lead them to Lucian—Thaddeus’s murderous uncle—or finally give the Rhododendron family some answers about the fate of Teofil’s brother.
As his troubles at home and school mount, Thaddeus’s mood grows dark and he retreats from all those who have supported him in the past. Just when he thinks things can’t get any worse, the Bearagon returns to threaten not only Thaddeus and those he loves, but his new school acquaintances as well. This confrontation brings to light the last secrets from Thaddeus’s past, more than one shocking revelation—and more than one enemy.

Ending: Happily Ever After