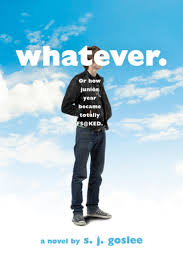 When Mike Tate’s girlfriend breaks up with him, because, she says, they were never really dating, Mike is forced down a path of self-discovery. On top of that, his ex-girlfriend convinced him to run for student government, he gets nominated to homecoming court, and a classmate who used to torment him is now being strangely nice.

Junior year is about to start. Here’s what Mike Tate knows: His friends are awesome and their crappy garage band is a great excuse to drink cheap beer. Rook Wallace is the devil. The Lemonheads rock. And his girlfriend Lisa is the coolest. Then Lisa breaks up with him, which makes Mike only a little sad, because they’ll stay friends and he never knew what to do with her boobs anyway. But when Mike finds out why Lisa dumped him, it blows his mind. And worse—he gets elected to homecoming court.