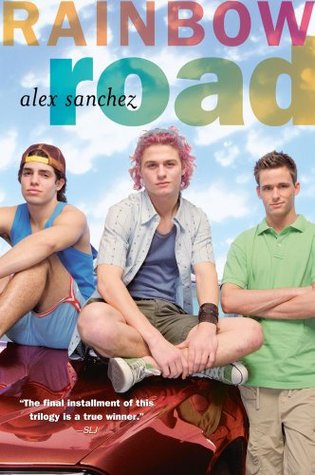 In this final installment of the Rainbow trilogy, Jason has been asked to be the graduation speaker at a new high school for gay teens in Los Angeles. His boyfriend Kyle and his friend Nelson decide to accompany him on his cross-country road trip. While Nelson searches for love on the road, the constant togetherness and several mishaps put Kyle and Jason’s relationship to the test.

Jason Carrillo came out to his basketball team senior year and lost his university scholarship. Now, with graduation behind him and summer ending, he’s asked to speak at the opening of a gay and lesbian high school across the country. But after spending years in the closet and losing his scholarship dream, what message can he offer?

Kyle Meeks is getting ready to go to Princeton in the fall and trying to see as much as possible of his boyfriend Jason before they have to separate. When Jason tells him about his speaking invitation, Kyle jumps at the chance to drive across country with him. Yet he can’t help worrying: Will their romance survive two weeks crammed together in a car?

Nelson Glassman is happy his best friend Kyle has found love with Jason. Now he’s looking for his own true love — and hopes he might find his soul mate during the road trip. But will being the “third wheel” in a trio ruin his friendships with Kyle and Jason?

During an eye-opening postgraduation summer road trip, each of the three very different boys also embarks on a personal journey across a landscape of love, sexuality, homophobia, and above all, friendship.