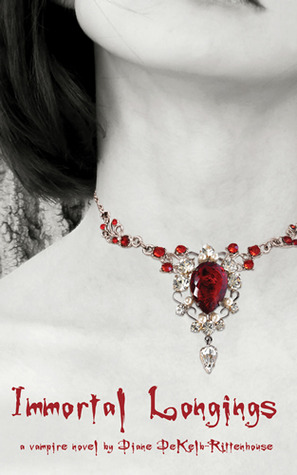 Lauren is in love with her best friend Kayla, bi-racial and bisexual lead actress in the drama club. The two both take jobs at a Manhattan vintage clothing store- run by a vampire.

Lauren and Kayla are the perfect high school couple–except they aren’t actually a couple. The cute, smart, sarcastic Lauren is secretly in love with her best friend, Kayla, the gorgeous bi-racial lead actress in the drama club. But Kayla, one of the most popular girls at school, changes partners (male and female) like other girls change shoes.

After seeing a play in Manhattan one autumn afternoon, the two 17-year-olds wander into a vintage clothing store, Deja Nous. Their impromptu shopping spree leads to a chance meeting with the mysterious and beautiful owner, Elizabeth Valiant. Despite strange, subtle warnings from Matt, another clerk at the store, both girls agree to take after-school jobs at the enticing shop. On the ride home to Queens, Kayla talks non-stop about the wonderful clothes, the fabulous Elizabeth and how much fun the girls will have working together.

Deja Nous–and the intriguing and sensual Elizabeth–soon becomes an obsession for Lauren and Kayla. Then, after being accosted at the subway by a strange man and overhearing a surprising conversation, Lauren accidentally discovers the secret behind the shop and the Valiant family. As she delves deeper into the mystery, she realizes that her life and that of her beloved Kayla are in danger–life-threatening danger–from a centuries-old curse.