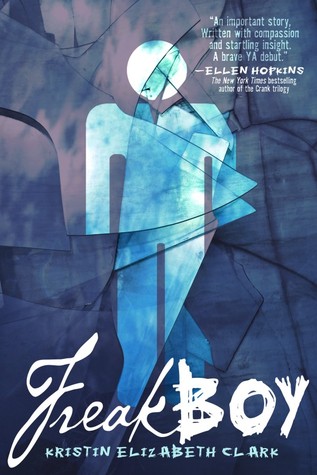 This book in prose follows the POVs of Brendan who is coming to terms with his genderfluidity, his girlfriend Vanessa whose struggling with his revelations, and the trans woman Angel who offers him help and understanding.

“From the outside, Brendan Chase seems to have it pretty easy. He’s a star wrestler, a video game aficionado, and a loving boyfriend to his seemingly perfect match, Vanessa. But on the inside, Brendan struggles to understand why his body feels so wrong—why he sometimes fantasizes having long hair, soft skin, and gentle curves. Is there even a name for guys like him? Guys who sometimes want to be girls? Or is Brendan just a freak?

In Freakboy’s razor-sharp verse, Kristin Clark folds three narratives into one powerful story: Brendan trying to understand his sexual identity, Vanessa fighting to keep her and Brendan’s relationship alive, and Angel struggling to confront her demons.”