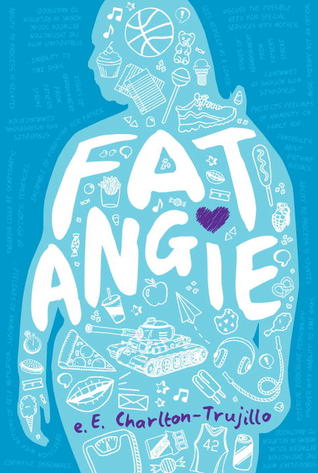 Angie is fat and socially ostracized after a public attempted suicide. Her mother and therapist are both enormously critical of her weight, and while a romance featuring a queer fat girl is refreshing representation, there are many problems with how weight, romance, and relationships are approached.

Her sister was captured in Iraq, she’s the resident laughingstock at school, and her therapist tells her to count instead of eat. Can a daring new girl in her life really change anything?

Angie is broken — by her can’t-be-bothered mother, by her high-school tormenters, and by being the only one who thinks her varsity-athlete-turned-war-hero sister is still alive. Hiding under a mountain of junk food hasn’t kept the pain (or the shouts of “crazy mad cow!”) away. Having failed to kill herself — in front of a gym full of kids — she’s back at high school just trying to make it through each day. That is, until the arrival of KC Romance, the kind of girl who doesn’t exist in Dryfalls, Ohio. A girl who is one hundred and ninety-nine percent wow! A girl who never sees her as Fat Angie, and who knows too well that the package doesn’t always match what’s inside. With an offbeat sensibility, mean girls to rival a horror classic, and characters both outrageous and touching, this darkly comic anti-romantic romance will appeal to anyone who likes entertaining and meaningful fiction.

It has been awarded the Stonewall Book Award-Mike Morgan and Larry Romans Children’s & Young Adult Literature Award for 2014.