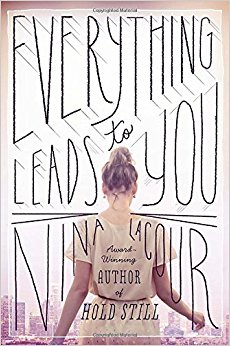 Aspiring production designer Emi and her friend Charlotte try to solve the mystery of a letter from a dead Hollywood star. A fun story featuring a lot of detail about filmmaking and a happily-ever-after.

Check out this book and more on our best of list for books with queer joy and happy endings.

“A love letter to the craft and romance of film and fate in front of—and behind—the camera from the award-winning author of Hold Still.

A wunderkind young set designer, Emi has already started to find her way in the competitive Hollywood film world.

Emi is a film buff and a true romantic, but her real-life relationships are a mess. She has desperately gone back to the same girl too many times to mention. But then a mysterious letter from a silver screen legend leads Emi to Ava. Ava is unlike anyone Emi has ever met. She has a tumultuous, not-so-glamorous past, and lives an unconventional life. She’s enigmatic…. She’s beautiful. And she is about to expand Emi’s understanding of family, acceptance, and true romance.”

Sexual and Romantic Orientation:
Emi talks about dating boys in the past, but seems to be mostly attracted to girls now. She does not use a specific label.

Race/Ethnicity:
Emi is biracial, and describes herself as “one quarter black.” She is white passing.

Religion:
Ava (a side character) deals with religious and homophobic adults.