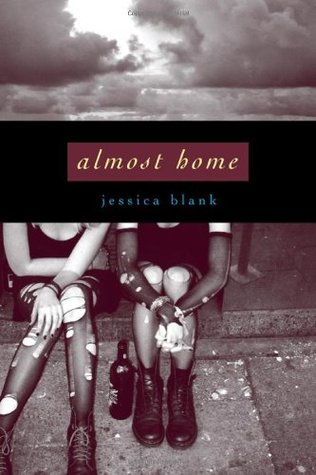 Almost Home takes seven points of view as it follows seven runaway homeless teens living on the streets of Los Angeles. One of the seven, Rusty, is gay; the characters weave in and out of each other’s lives, and the narrative doesn’t end with a clear conclusion.

Why would anyone choose to live on the streets? There is Eeyore, just twelve years old when she runs away from her privileged home, harboring a secret she’s too ashamed to tell anyone. Rusty is a sensitive gay teen who winds up alone when his older boyfriend ditches him in Hollywood. Squid has gone through too many foster homes to count. There’s Scabius, a delusional punk from Utah who takes the “me against the world” motto to dangerous extremes. And Critter is a heroin dealer with movie star looks and a vulnerable heart. Laura should be home studying, but she can’t face another one of her mom’s boyfriends. And then there’s Tracy, the damaged thread that ties them all together, irrevocably changing each person’s life she touches. This unlikely band of characters form their own dysfunctional family, complete with love and belonging, abuse and betrayal. Each will make their way home, wherever it may be.