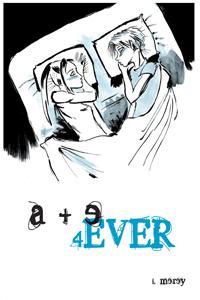 This graphic novel follows gender-non-conforming Asher, an artist who is terrified of being touched, and Eulalie (Eu), labelled a dyke but who is only shown in relationships with men, as they develop a friendship and relationship. Both are Jewish. Includes graphic sexual scenes.

Asher Machnik is a teenage boy cursed with a beautiful androgynous face. Guys punch him, girls slag him and by high school he’s developed an intense fear of being touched. Art remains his only escape from an otherwise emotionally empty life. Eulalie Mason is the lonely, tough-talking dyke from school who befriends Ash. The only one to see and accept all of his sides as a loner, a fellow artist and a best friend, she’s starting to wonder if ash is ever going to see all of her…. a + e 4EVERis a graphic novel set in that ambiguous crossroads where love and friendship, boy and girl, straight and gay meet. It goes where few books have ventured, into genderqueer life, where affections aren’t black and white.

Sexual Orientation:
Not explicitly addressed.  Ash dates men and women over the course of the book and could probably be described as pansexual.  Eu has a thing for Ash.

Trigger Warnings:
Sexual Assault: Ash is drugged in a bathroom at a club and sexually assaulted by multiple men.  There is a semblance of incest implied between Ash and his sister. Ash has an eating disorder.