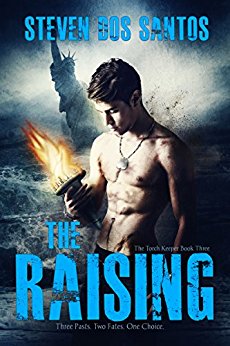 Lucky has become a symbol of the revolution that is intent upon overthrowing the tyrannical government. However, he is haunted by his dark past and his possible involvement with the events that threw his world into chaos.

Once a humble orphan existing in the shadows of the brutal Establishment, Lucian “Lucky” Spark has evolved from lone vigilante to “The Torch Keeper,” a fiery symbol of the valiant resistance. Lucky now leads the heroic fight to restore justice and liberty to the downtrodden survivors of a world devastated by geological catastrophe and tyranny.

But as the Torch Brigade prepares to launch a final, desperate gambit against the ruthless forces controlled by his former companion, the mysterious Cassius Thorn, Lucky struggles with the secret of his own true identity. Is he the spark of hope destined to unite a nation and finally end this destructive crusade? Or is he truly the dark catalyst of the past, intent on reducing the remnants of humanity to smoldering embers?

With the fates of his brainwashed brother, Cole, and genetically transformed love, Digory Tycho, caught in the crossfire of epic war, Lucky’s final choice may have apocalyptic consequences for an entire world.