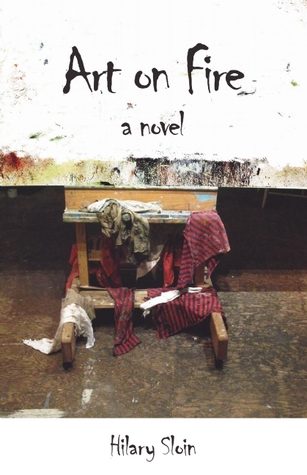 This fake biography looks at the life of Francesca deSilva, who left home after coming out as a lesbian and went to invent “pseudorealism”. Interspersed with her narrative are essays on her work that explore her art, the lesbian life, and psychology.

Art on Fire is the apparent biography of subversive painter Francesca deSilva, the founding foremother of “pseudorealism,” who lived hard and died young. But in the tradition of Vladimir Nabokov’s acclaimed novel Pale Fire, it’s a fiction from start to finish. It opens with Francesca’s early life. We learn about her childhood love, the chess genius Lisa Sinsong, as well as her rivalry with her brilliant sister Isabella, who publishes an acclaimed volume of poetry at the age of twelve. She compensates for the failings of her less than attentive parents by turning to her grandmother who is loyal and adoring until she learns Francesca is a lesbian, when she rejects her. Francesca flees to a ramshackle cabin in Wellfleet, Massachusetts, working weekends at the flea market. She breaks into the gloomy basement of a house, where she begins her life as a painter. Much to her confusion and even dismay, fame comes quickly.

Interspersed with Francesca’s narrative are thirteen critical “essays” on the paintings of Francesca deSilva by critics, academics, and psychologists—essays that are razor-sharp satires on art, lesbian life, and the academic world, puncturing pretentiousness with every paragraph. Art on Fire is a darkly comic, pitch-perfect, and fearless satire on the very art of biography itself.

Art on Fire is the latest winner of the Bywater Prize for Fiction and was a finalist for the Heekin Foundation Award, the Dana Awards, and the Story Oaks Prize. It was mistakenly awarded the nonfiction prize in the Amherst Book and Plow Competition. It was also awarded the 2014 Barbara Gittings Literature Award by the Stonewall Book Awards Committee.