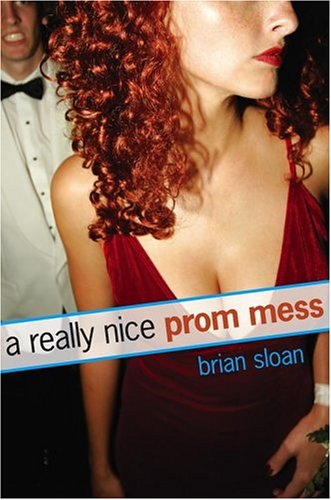 Cam’s boyfriend has what he thinks is a brilliant idea–he and Cam should go to prom with fake female dates, and the two couples will hang out together. But by the end of the night, Cam’s date is drunk, Cam and his boyfriend have broken up, and the police are involved.

Well, in summary, your fake date’s in the bathroom with a hangover and a crispy hairdo, while my fake date is out wandering the Willard, searching for his heterosexuality or something.

High school senior Cameron Hayes gets coerced into going to the prom with a girl, even though he’d rather be with his boyfriend. The evening goes from bad to worse when his fake date gets sloshed, his boyfriend slugs him when he sees Cam kissing his fake date, and Cam flees the prom in disguise with a drug dealer. Then things really spin out of control. Over the course of one harrowing and hysterical night, Cameron’s life comes undone, leading to accidental revelations, criminal adventures, and an unlikely romance.

Brian Sloan’s madcap romp is a hilarious take on a teenage rite of passage — with a decided twist.

Trigger Warnings: alcohol and substance use