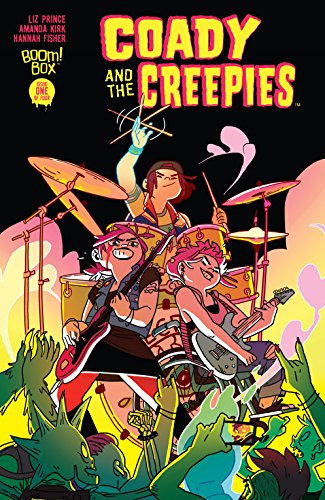 Punk might not be, but Coady sure is. The triples Coady, Corey and Criss are out to make a name for themselves as the best punk band ever. In order to that they are going to have to fight their way through fake band promoters, misogynistic rival bands and head to the underworld itself. Can these three save the world from punk rock ghosts and rock out at the same time?

Punk’s Not Dead! …but Coady is.

Sisters and bandmates Coady, Corey, and Criss are The Creepies, a trio of punk rockers determined to become the greatest band that’s ever lived. But that’s kinda tough when one of them is technically dead. As The Creepies, they’re heading out on their first tour since a freak accident left Coady eerily unscathed…fighting their way through blood-sucking promoters, fanboy zombies and ghoulish rival bands to achieve their dream. There’s only one problem…it’s hard to be the greatest band that ever lived when your drummer is…a ghost?

Disability: Corey has a large facial scar, Criss is in a wheelchair.