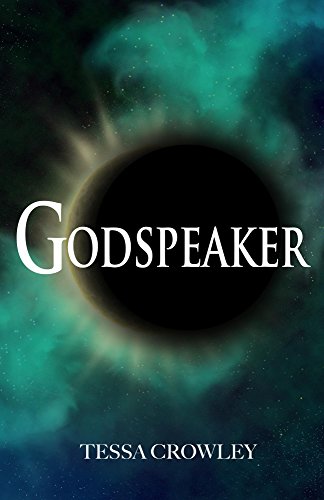 “By my estimation, I have about five days left to live, so I must write this quickly.” Alone in his cell as the world breaks around him, Silas of House Olen scratches out a desperate biography. He has walked with queens, run from a shattering city, watched a great shadow swallow the sun. He has met a god and fallen in love with him — and now he is going to die. “I never pictured myself ever writing an autobiography, though that may be due in large part to the fact that I never really considered I might have a life worthy of one. But here at the end of all things, alone in my prison cell, while the very world crumbles around the city, I understand the urgency of giving this dreadful sundering a narrative and context.” Silas is a Godspeaker, a single mortal chosen among thousands to be the mouth and the hands and the will of a god — in his case, the Night Father, Umbrion. It’s a tremendous position for awkward, anxious, stuttering Silas, but no sooner had he taken up the mantle had his patron god killed the queen and broke the city in twain. Now he is an unwilling footsoldier in a war between the gods, as great demons rise up from the sea, and as all of Andelan fights to survive

Genre: Fantasy
Representation:
Note: This entry was written and recommended by Sarah G.

Sexuality:
Note:(Only Perenor is explicitly mentioned, others are assumed based on given relationships within the story)
Gay: Silas, Umbrion
Lesbian: Nerisa, Roslin
Asexual: Perenor
Heterosexual: Soya

Not mentioned in the book.

Race/Ethnicity:
Not mentioned/ It’s a fantasy world, and while there are almost definitely links to the real world, I couldn’t say for sure.

Additional Notes: Silas has a stutter. This entry was written and recommended by Sarah G.

Ending:
Heartbreaking, Silas gives his life to use his magic to trap Umbrion for eternity, so that he can no longer wage war on the other gods.