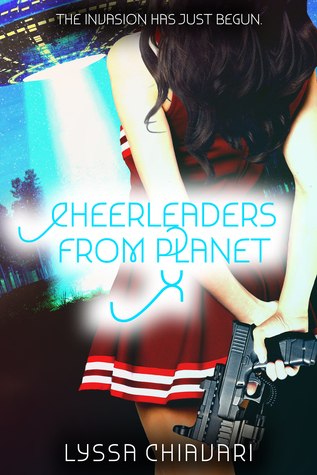 When Laura sees a cheerleader perform superhuman feats and girls start disappearing from the city, her life will never be the same again. Shailene, a girl on the same team as the cheerleader Laura saw, may have more answers, but she’s not talking. And Laura can’t shake the feeling that she knows Shailene from somewhere. They’ll have to work together and figure out why they’re drawn to each other to save the planet and discover what’s really going on.

Publisher’s Description:
Aliens are among us. And humanity’s only hope just happens to carry pom-poms. Laura Clark thought she was just your average college freshman—until the day she saw a cheerleader on a skateboard get into a superhuman brawl with a lightning-wielding stranger in a trenchcoat. And the weirdest thing of all? Nobody else saw it happen. Nobody, that is, except the beautiful but standoffish Shailene, one of the mysterious (and possibly super-powered) cheerleaders from Laura’s rival school, Bayview University. When girls start disappearing all over the City, Laura suddenly realizes that she may have seen more than she should. And if she wants to keep from disappearing herself, she needs to find some answers. But though Laura can’t shake the feeling that they’re somehow connected, Shailene is more than a little reluctant to share her secrets. With strange, bug-like creatures and a sinister man in a dark coat stalking her every step, Laura will have to uncover the truth fast if she wants to survive. The fate of the planet just might hang in the balance.