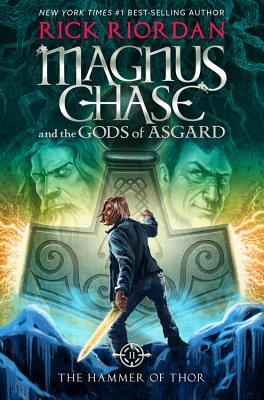 In the second book of this series, protagonist Magnus Chase, formerly homeless child of the Norse god Frey and now resident of Valhalla, continues his adventures with hijabi Valkyrie Sam, dwarf Blitz and deaf ASL-signing elf Hearth. They are joined by genderfluid Alex to find the missing sword of Thor.

Thor’s hammer is missing again. The thunder god has a disturbing habit of misplacing his weapon–the mightiest force in the Nine Worlds. But this time the hammer isn’t just lost. It has fallen into enemy hands. If Magnus Chase and his friends can’t retrieve the hammer quickly, the mortal worlds will be defenseless against an onslaught of giants. Ragnarok will begin. The Nine Worlds will burn. Unfortunately, the only person who can broker a deal for the hammer’s return is the gods’ worst enemy, Loki–and the price he wants is very high.

Sexual and Romantic Orientation
Magnus loves Alex through all genders, and could be described as pansexual
Heterosexual: Samirah
Alex never defines her sexual orientation.