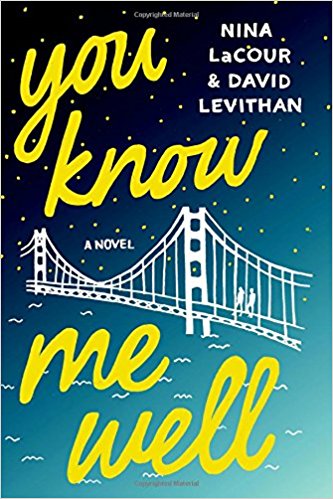 This collaboration between queer YA giants David Levithan and Nina LaCour features a broad cast of queer, high-school aged characters. There is a relationship between two boys and two girls and many queer spaces including Pride and gay bars.

Who knows you well? Your best friend? Your boyfriend or girlfriend? A stranger you meet on a crazy night? No one, really?

Mark and Kate have sat next to each other for an entire year, but have never spoken. For whatever reason, their paths outside of class have never crossed.

That is until Kate spots Mark miles away from home, out in the city for a wild, unexpected night. Kate is lost, having just run away from a chance to finally meet the girl she has been in love with from afar. Mark, meanwhile, is in love with his best friend Ryan, who may or may not feel the same way.

When Kate and Mark meet up, little do they know how important they will become to each other — and how, in a very short time, they will know each other better than any of the people who are supposed to know them more.

Race/Ethnicity:
Kate and Mark are both white.

Ownvoices: Both authors are Queer.