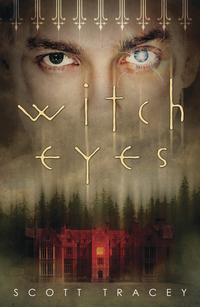 Braden was born with powers that allow him to have visions of the future. When one of those visions alerts him that the uncle who raised him is in danger, Braden flees to the old city of Belle Dam, where two families have been feuding for centuries. Braden soon learns that Tray, the boy he’s crushing on is the son of Catherine, the head of one of the families, and that Jason Thorpe, the head of the other family, is his father. Consequently, he becomes determined to get to the bottom of what is causing the feud.

Braden was born with witch eyes: the ability to see the world as it truly is: a blinding explosion of memories, darkness, and magic. The power enables Braden to see through spells and lies, but at the cost of horrible pain.

After a terrifying vision reveals imminent danger for the uncle who raised and instructed him, Braden retreats to Belle Dam, an old city divided by two feuding witch dynasties. As rival family heads Catherine Lansing and Jason Thorpe desperately try to use Braden’s powers to unlock Belle Dam’s secrets, Braden vows never to become their sacrificial pawn. But everything changes when Braden learns that Jason is his father–and Trey, the enigmatic guy he’s falling for, is Catherine’s son.

To stop an insidious dark magic from consuming the town, Braden must master his gift—and risk losing the one he loves.