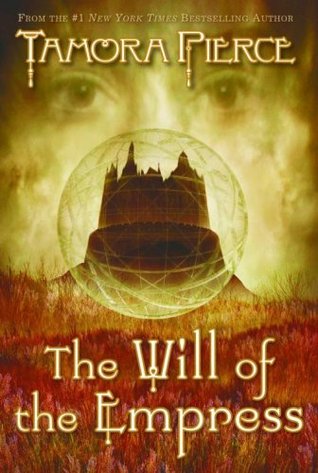 In the 9th book of Tamora Pierce’s Emelan series, Sandry, Daja, Briar and Tris travel to Namorn (fantasy Russia) to engage in international diplomacy and deal with Sandry’s noble estates while rebuilding their fractured friendships. While there, Daja falls in love with a woman and realizes she is a Lesbian/Queer. Features a racially diverse cast and brief mention of their foster mothers, a Lesbian/Queer and a bisexual woman.

Sandry, Daja, Briar, and Tris, are older now and back together again, in an exciting and much-awaited, stand-alone novel by everyone’s favorite mage, Tamora Pierce.

For years the Empress of Namorn has pressed her young cousin, Lady Sandrilene fa Toren, to visit her vast lands within the Empire’s borders. Sandry has avoided the invitation for as long as it was possible. Now Sandry has agreed to pay that overdue visit. Sandry’s uncle promises guards to accompany her. But they’re hardly a group of warriors! They’re her old friends from Winding Circle: Daja, Tris, and Briar. Sandry hardly knows them now. They’ve grown up and grown apart. Sandry isn’t sure they’ll ever find their old connection again – or if she even wants them to. When they arrive at the pala