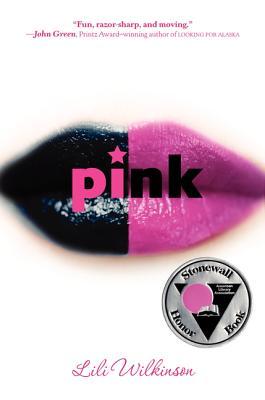 Ava’s liberal parents and feminist girlfriend have apparently pushed Ava into a persona she doesn’t like; in an attempt to try being more ‘normal,’ she transfers to a private school and starts wearing Pink and contributing to the school musical. Poor decisions abound as she comes of age.

Ava is tired of her ultracool attitude, ultraradical politics, and ultrablack clothing. She’s ready to try something new—she’s even ready to be someone new. Someone who fits in, someone with a gorgeous boyfriend, someone who wears pink.

But Ava soon finds that changing herself is more complicated than changing her wardrobe. Even getting involved in the school musical raises issues she never imagined. As she faces surprising choices and unforeseen consequences, Ava wonders if she will ever figure out who she really wants to be.