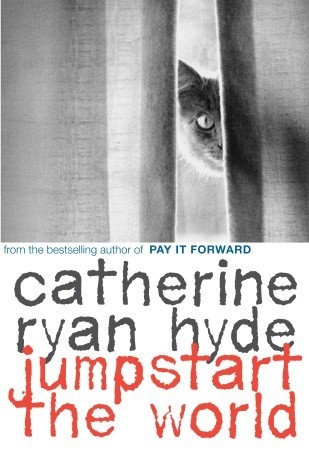 Elle is obsessed with her new neighbor Frank. Even though he is a grown up she is falling hard for him.  Elle does not react well when she finds out Frank is trans, and works out what that means for her and her feelings for him.

Note: this book has problematic representation. It follows the “acceptance” narrative, which is described in this post, written by Vee S.

Read an essay from activist Leslie Feinberg, a transgender writer and the estranged sibling of the author of this book. This essay describes how Catherine Ryan Hyde is using Leslie’s story in this novel for her own hostile purposes.

“Elle is a loner. She doesn’t need people. Which is a good thing, because she’s on her own: she had to move into her own apartment so her mother’s boyfriend won’t have to deal with her.

Then she meets Frank, the guy who lives next door. He’s older and has a girlfriend, but Elle can’t stop thinking about him. Frank isn’t like anyone Elle has ever met. He listens to her. He’s gentle. And Elle is falling for him, hard.
But Frank is different in a way that Elle was never prepared for: he’s transgender. And when Elle learns the truth, her world is turned upside down.  Now she’ll have to search inside herself to find not only the true meaning of friendship but her own role in jumpstarting the world.

Tender, honest, and compassionate, Jumpstart the World is a stunning story to make you laugh, cry, and honor the power of love.”