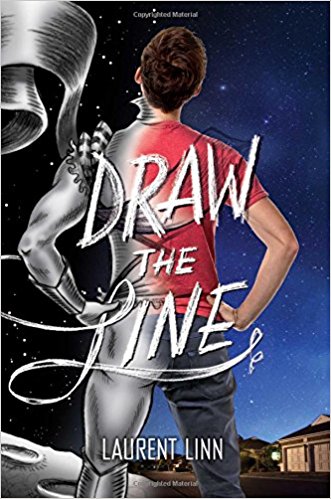 Adrian is a gay teen in a small Texas town who expresses himself through the superheroes he draws. He’s content to stay mostly invisible, until another gay student at his school is the victim of a hate crime, and Adrian decides to come to his defense.

After a hate crime occurs in his small Texas town, Adrian Piper must discover his own power, decide how to use it, and know where to draw the line in this “powerful debut” novel (Publishers Weekly, starred review) exquisitely illustrated by the author.

Adrian Piper is used to blending into the background. He may be a talented artist, a sci-fi geek, and gay, but at his Texas high school those traits would only bring him the worst kind of attention.

In fact, the only place he feels free to express himself is at his drawing table, crafting a secret world through his own Renaissance-art-inspired superhero, Graphite.

But in real life, when a shocking hate crime flips his world upside down, Adrian must decide what kind of person he wants to be. Maybe it’s time to not be so invisible after all—no matter how dangerous the risk.