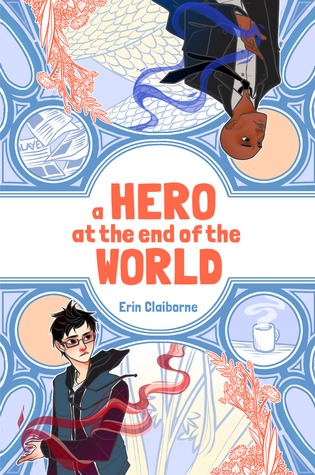 A fluffy, happy read that riffs off of Harry Potter.

Sixteen year-old Ewan Mao knows one thing for certain: according to prophecy, it’s his destiny to kill the evil tyrant whose dark reign has terrorized Britain. Although he’s just a normal boy, deep down Ewan is confident that he has exactly what it takes to be a hero. But when Ewan’s big moment comes, he freezes. His best friend, the clever and talented Oliver Abrams, defeats the villain for him, and Ewan’s bright future crumbles before his eyes.

Five years later, Oliver has a job as an Unusual in the government’s Serious Magical Crimes Agency, the life he and Ewan always dreamed of. But a routine investigation leads him and his partner, Sophie Stuart, to uncover a dangerous and powerful cult… one that seems to have drawn his former best friend into a plot to end the world.

A deftly plotted, hysterically funny take on Chosen One narratives, A Hero at the End of the World expertly walks the fine line between satire and sincerity. Its sensitive depiction of a broken friendship and wry take-down of unfairly great expectations will appeal to all readers of modern fantasy.