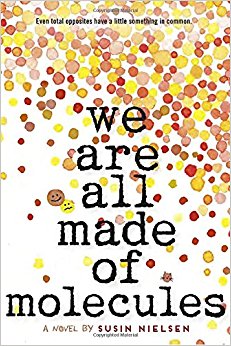 Stewart and Ashley could not be more opposite, with socially awkward Stewart the smartest kid in the school, and popular but mean Ashley occupying the lower end of the grade curve. When her dad moves in with his mom, the two are forced to get along.

Ashley’s and Stewart’s worlds collide when Stewart and his dad move in with Ashley and her mom. The Brady Bunch it isn’t. Stewart is trying to be 89.9 percent happy about it–he’s always wanted a sister. But Ashley is 110 percent horrified. She already has to hide the real reason her dad moved out; “Spewart” could further threaten her position at the top of the social ladder.

They’re complete opposites, but they have one thing in common: they—like everyone else—are made of molecules.

Trigger Warnings:
Ableism: Stewart is written as neurodiverse though he is not labeled.  He is made fun of by his classmates for his personality.