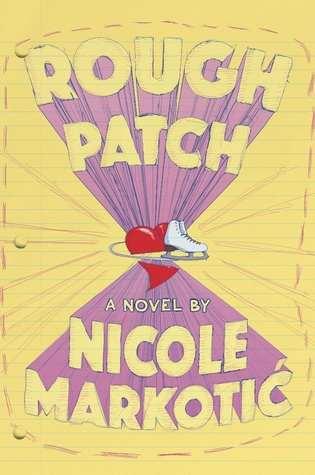 Kiera starts high school with her boy crazy BFF and figure skating dreams, but she doesn’t know how to tell her friends or family she no sure if she wants a boyfriend. As she grapples with her bisexuality, she meets Jayne, and it seems like everything is going off the rails.

When fifteen-year-old Keira starts high school, she almost wishes she could write “Hi, my name is Keira, and I’m bisexual!” on her nametag. Needless to say, she’s actually terrified to announce—let alone fully explore—her sexuality. Quirky but shy, loyal yet a bit zany, Keira navigates her growing interest in kissing both girls and boys while not alienating her BFF, boy-crazy Sita. As the two acclimate to their new high school, they manage to find lunch tablemates and make lists of the school’s cutest boys. But Keira is caught “in between”—unable to fully participate, yet too scared to come clean.

She’s also feeling the pressure of family: parents who married too young and have differing parenting styles; a younger sister in a wheelchair from whom adults expect either too little or too much; and her popular older brother who takes pleasure in taunting Keira. She finds solace in preparing for the regional finals of figure skating, a hobby she knows is geeky and “het girl” yet instills her with confidence. But when she meets a girl named Jayne who seems perfect for her, she isn’t so confident she can pull off her charade any longer.

Trigger Warnings:
Homophobia, biphobia, Keira gets stabbed in a homophobic attack at the end of the book.