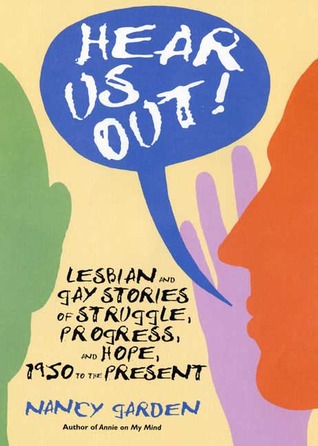 Nancy Garden shares stories, both fact and fiction, of being gay in various time periods. Whether staying in the closet in the 1950s, or at the forefront of the movement in the 70s, voices from every generation make themselves heard.

What was it like being young and gay during the closeted 1950s, the exuberant beginnings of the modern gay rights movement in the 1970s, or the frightening outbreak of HIV and AIDS in the 1980s? In this unique history, Nancy Garden uses both fact and fiction to explore just what it has meant to be young and gay in America during the last fifty years. For each decade from the 1950s on, she discusses in an essay the social and political events that shaped the lives of LGBT (lesbian, gay, bisexual, and transgender) people during that era. Then, in two short stories, she explores the emotional experiences of young gay people coming of age during those times, giving vivid insight into what it really felt like.

Hear Us Out! is a comprehensive and rich account of gay life, both public and private, from one of the pioneers of young adult lesbian and gay literature.