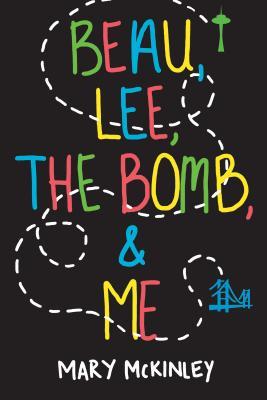 Rusty is bullied every day at school thanks to being smart and fat, but she gets by with her friendship formed with Lee and a rescue dog named the Bomb. They meet gay Beau, and when the bullying gets bad, he runs off to San Francisco. What follows is a road trip between friends finding out what it means to be yourself.

When Beau transferred to our school. I thought: “Good; fresh meat.” Because I knew he would be tormented the entire time he was at Baboon High. Like I am. All day. . .every day.

In high school, there are few worse crimes than being smart or fat. Lucky me, I’m both. But when Beau Gales blows in to town, it takes about two minutes for the jackasses at our Seattle school to figure out he’s gay, and that makes him an even bigger target. Have you ever heard the saying: ‘The enemy of my enemy is my friend’? There’s something to that.

When the bullying gets violent and Beau decides to run away to San Francisco to ask his Uncle Frankie for advice, we all go. Beau, me, Leonie (designated class slut), and a scruffy rescue dog called The Bomb–a tribe of misfits crammed into my mom’s minivan. Throw in a detour to the Twilight town of Forks, armed robbery, cool record shops, confessions, breakups and makeups, and you have the kind of journey that can change the way you look at the whole world–and yourself.